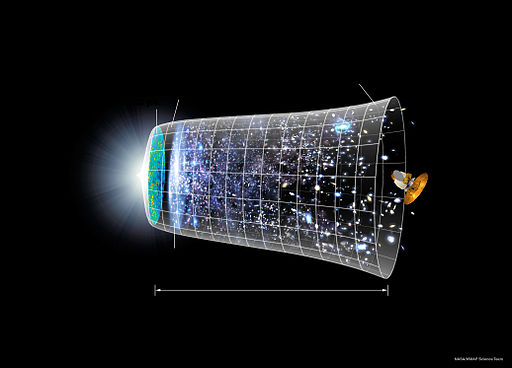 This balloon activity models the universe: once compact but now expanding. This activity follows the PEOE model.

Organize your class into groups of 2–4 students. The following instructions are for the students.

In your group, predict what will happen to the “galaxies” on the balloon when the balloon is blown up. Why might the distance between galaxies increase? Is the increase in distance constant for all galaxies?

Imagine that you are located in G1. The other dots represent other galaxies. Measure how far apart each galaxy is from the others.

Explain how your balloon model represents the universe.

Balloons may be deflated and disposed of in the garbage.

The dots (galaxies) move further apart from one another. Also, the galaxies that were initially further apart on the balloon move a greater distance from the home galaxy compared to those that were closer.

How does it work?

When the balloon is inflated, its surface area increases and so the dots on the surface (representing galaxies) move further apart. Students’ graphs should illustrate that the increase in distance is not constant: it increases with distance from G1. This observation supports the big bang theory that the universe is expanding and the galaxies are therefore moving further apart. The galaxies are just “hitched along for the ride” in the expansion of space.

Note: the distances in the equation are at the beginning and end of inflation and the time is the interval between inflations.

A1.8 analyse and interpret qualitative and/or quantitative data to determine whether the evidence supports or refutes the initial prediction or hypothesis, identifying possible sources of error, bias, or uncertainty

A1.10 draw conclusions based on inquiry results and research findings, and justify their conclusions

D3.1 describe observational and theoretical evidence relating to the origin and evolution of the universe (e.g., evidence supporting the big bang theory)

There's a growing volume of debris in orbit around the earth, commonly called space junk, that ranges from old spacecraft down to tiny flecks of paint. Canada plays a role in scanning the sky for... END_OF_DOCUMENT_TOKEN_TO_BE_REPLACED

The Universe in a Cup of Coffee

You might have plans to cuddle up with your sweetheart this Valentine’s Day, but it’s probably safe to say they won’t include twisting around each other while hanging upside down from a strand... END_OF_DOCUMENT_TOKEN_TO_BE_REPLACED