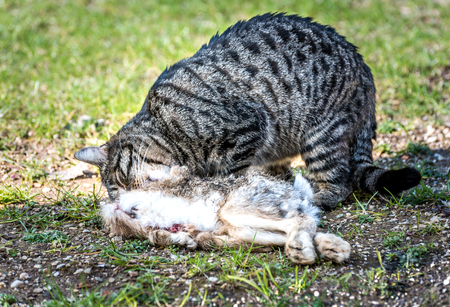 Predator–prey relationships are one of the most important biotic relationships in the sustainability of an ecosystem. Predators are the natural controls in an ecosystem, limiting the size of a prey population. Many studies have illustrated that the long-term sustainability of an ecosystem is severely affected if top predators are eliminated. Prey populations increase as a result of the loss of their natural predators and they overgraze the vegetation resulting in ecosystem collapse.

Top predators―including wolves, grizzly bears, sea otters, and alligators―are referred to as keystone species. They are crucial in maintaining and sustaining ecosystem function. For example, on the west coast of Canada the loss of sea otters, a keystone species, has led to an increase in populations of sea urchins and other shellfish which are overgrazing on the underwater kelp forests and destroying the habitat of many different organisms.

This game models the interrelated effects of predator (fox) and prey (rabbit) populations over several generations.

What Is a Genetically Modified Food?

Have we been eating genetically modified foods or GMOs for centuries? Have look at this Scientific American video. Formulate your own opinion. Link to video   END_OF_DOCUMENT_TOKEN_TO_BE_REPLACED

Queering Engineering, a conference to support and promote 2SLGBTQIA+ diversity in engineering

Queering Engineering, a conference to support and promote 2SLGBTQIA+ diversity in engineering - submitted by Amy Gorecki We are excited to share a free, virtual STEM conference designed for students... END_OF_DOCUMENT_TOKEN_TO_BE_REPLACED