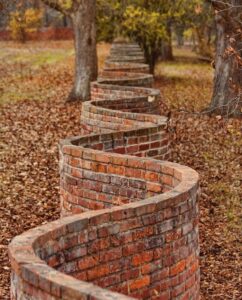 Britain’s known for many charming things. Afternoon tea with scones (do you put the clotted cream or jam on first?). Mysterious and romantic walks in parks and gardens. Wavy walls. Wait, wavy walls? Wavy walls!

Popularized in the United Kingdom, wavy walls were since then exported elsewhere, including into the United States. So-called crinkle crankle garden walls (don’t you just love that name?) are very economical—they end up using fewer bricks than straight walls. Your first reaction was probably just like ours, dear Pandas: that doesn’t make any sense! Well, wavy walls end up using fewer bricks because they can be one brick thin. Straight walls would topple over if you made them one brick wide. Meanwhile, all the curves in the wall give it stability.

Wiggle down our post with your scroll wheels and leave us a comment in cursive about what you think, dear Pandas. And read on for Bored Panda’s interview about crinkle crankle walls with Ed Broom from Suffolk who has documented a list of all the wavy walls in his neck of the woods.

The Wonderful Reason Babies Hiccup So Much

https://youtu.be/iW3uyeg_JbY Ah, hiccups. They are typically harmless, and yet also very annoying. But why do they happen in the first place? Hosted by: Michael Aranda END_OF_DOCUMENT_TOKEN_TO_BE_REPLACED

Women in science who changed the world - submitted by Leila Knetsch

https://youtu.be/W53Ks824GTA   Rosalind Franklin, Marie Curie, Caroline Herschel... These are just a few examples of female scientists who have made world-changing discoveries. Watch the... END_OF_DOCUMENT_TOKEN_TO_BE_REPLACED

How to make Art from Slime We all know that playing with slime is one of the best things in the world.  But, what do you do when you’re done.  You can put it into a zip-lock bag and save it... END_OF_DOCUMENT_TOKEN_TO_BE_REPLACED