In the past few decades, fractals have become a popular visual tool to observe the complexity of mathematics based on quite simple rules. Fractals are usually able to be observed when an iterative process is used. This means that the result of a function is generated as a function of inputting the previous value of the function. It also means using complex numbers, useful concepts to apply and observe interesting results, the Mandelbrot Set being the most famous of them.

This article describes how the Mandelbrot Set came about, which is the plotted image the set of numbers that converge when the previous input is continually squared. That is, when fx+1=fx approaches a constant value (or alternates between values), where fx=x2. What is a challenge in this case is that x is a complex number rather than just a real number (so usually mathematicians do not use x, but z instead.) The value for x is ax + bi, where a and b are real numbers and i2 is -1 (called an imaginary number). An example of a complex number would be 0.5+4i.

As an example, suppose we took the complex number c1 = 0.1 + 0.5i. Squaring this results in the number c2=-0.24+0.1i. Once again, squaring this will produce c3= 0.0476 – 0.048i. Eventually, with subsequent iterations, the output of the iterative function (magnitude of c) will approach 0. In other words, the function converges on 0. Other numbers will not do this. Try, as an example, c=2+3i. You will find that this eventually “blows up” to a very large number (i.e., approaches infinity), not converging on a constant value. We consider any number to be a part of the Mandelbrot set if the number converges.

With this simple rule, the resulting graph has too many properties to list in this article; some of them comprise the fact that it is infinitely “zoomable”, and certain patterns are constantly repeated. Another counterintuitive property is that it has infinite perimeter, but a finite area!

For teachers who are interested in teaching fractals, the relatively simple task of teaching complex numbers, combined with a relatively straightforward computer program can be a rewarding and fascinating area of exploration for high school math and computer science students. 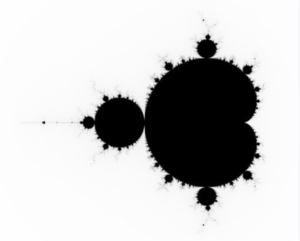 People around the world have watched science ‘happen in real time’ during the COVID-19 pandemic. In less than one year, the novel coronavirus emerged, was identified and millions vaccinated... END_OF_DOCUMENT_TOKEN_TO_BE_REPLACED

To all of you, my heart goes out to you as you struggle with the challenges of this way of learning that none of us anticipated.  I'm reading the frustrations from all sectors on... END_OF_DOCUMENT_TOKEN_TO_BE_REPLACED

https://youtu.be/F4xY0Pd9Hys So, you're waiting for your dinner to arrive and you're bored out of your mind. There's nothing to read... the conversation is slim to none... and you've... END_OF_DOCUMENT_TOKEN_TO_BE_REPLACED