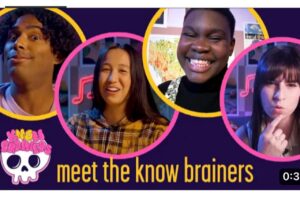 Welcome to Know Brainers, a channel where our group of non-experts attempts to satisfy curiosity by embarking on an arduous – but rewarding – journey. We’ll try, we’ll fail, and then we’ll try some more. And hopefully, just maybe…we’ll learn something along the way. We’re tackling questions big and small. Questions you didn’t ask, and some questions you only asked in your head because you were too embarrassed to say them out loud. In any case – we got you. Meet the Know Brainers Monica is Scarborough’s #1 fan – a title uncontested since bestowing it upon herself four years ago. As a chronic commuter, she is rarely seen without her suitcase. She commutes so often that the only thing she loves more than GO trains is telling people Tom Holland is the best Spiderman (and she might be right). As competitive as she is athletic, she’s basically Know Brainers’ very own Sporty Spice – just without the singing. Maryanne is a self-described “poster child for middle child syndrome.” She loves chicken wings, video games, and high-intensity interval training – though not necessarily in that order. She’s an accomplished academic (we’re glad one of us is!) with a BSc and a Master’s degree. When she’s not incessantly scrolling through TikTok, she can be found serenading her co-workers, albeit slightly off-key. We assure you it’s charming. Matt is Know Brainers’ resident Taurus and triple threat. They can sing, they can dance, they can act. There isn’t anything they can’t do! (Except juggle – but we digress.) Recently Matt tried their hand at baking, despite claiming to, “have never done it before” and made the most delicious chocolate chip cookie we’ve ever tried. But beyond their many interests, Matt’s one true love is their adorable 6 lb chihuahua, Henry. Laura reached peak 90s kid aesthetic and never looked back. She loves astrology and is 97% likely to accurately guess your star sign. Voted “best desk vibe” by her coworkers, Laura is an organized as she is funny. Oh, and we’re fairly certain she’s most likely, almost definitely, psychic.

Stay tuned to the STAO Blog for updates and information about more Know Brainers videos.

The Scientific Benefits of Boredom

https://youtu.be/LKPwKFigF8U Boredom makes you more creative, altruistic, introspective, and helps with autobiographical planning. This video was sponsored by LastPass: http://bit.ly/2wAsdUu I... END_OF_DOCUMENT_TOKEN_TO_BE_REPLACED