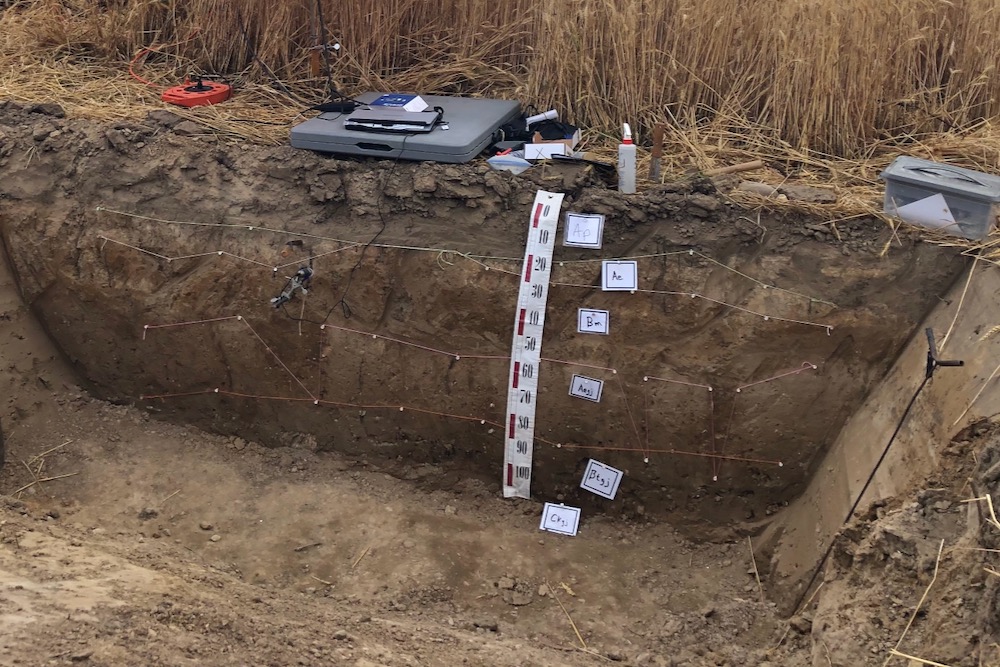 OMAFRA soil chemist Jim Warren dug a hole at the site to show how deep tillage can move materials between soil horizons. He said it’s evident that at some point in the last 50 years, the field was tilled to approximately 20 cm, which introduced material from the B horizon into the upper horizon which will affect its nutrient ability. Photo: Diana Martin

To reach the soil’s geology, you need to dig deep, but its impact on production is closer to the surface. For farmers, soil specialists or people in between, there was nothing more intriguing than the soil pit at the Harnessing the Power of Soil Health at the Grand River Raceway in July.

Ted Taylor, a soil specialist with SRG, provided a geological timeline for the Grand River Agricultural Society’s field, explaining that glacial sheets from northern Ontario, Georgian Bay and lakes Huron, Erie and Ontario met in the area. “It moved all the material into a spot that kind of centres almost where we are right now,” he said. The glaciers were nearly two miles thick, and in addition to pushing, scraping and moving any material in their path to a centre point, they also pushed down the tectonic plates before they began melting. As they melted, lakes were left behind where clay settled in the deep waters, and sand and gravel deposits formed banks and shorelines, said Taylor. “The Grand River is a spillway where meltwater flowed at extremely high velocities and dropped material that was the size of cobbles, small stone with a lot of gravels as well,” he said.

“Anybody familiar with Highway 3 and all the gravel deposits around there? We’re talking about an old beach line.” Taylor said much of the material dropped by the glacier, called till, would be compacted at depth, usually below a metre, but not at the surface. Despite glacial melt, the temperatures and fierce winds would have mimicked Antarctic conditions. This process dried the land but also blew the loess, consisting of very fine sand and silt, and medium-sized, high-water-holding-capacity materials, which impacted the foundation of soils, said Taylor.

Till is generally a mixture of rich sand, silt and clay, often clay loam or sandy loam soils with stones. “There are some really nice soils on top, but if this is the material down below and you’re wondering why have I got four per cent organic matter and these crops do really well in a normal year, but this year, they’re dead?” asked Taylor. “It’s because you’ve got this below. The water has nowhere else to go except down.” Land with loess, which is silty and holds water exceptionally well, can easily grow trees.

“Geology is the foundation of soils. The properties you look at in a pit are mostly based on the geological material those soils were developed upon,” Taylor said. “You could have the best-managed soil in the world but if your soil is inherently a challenge, soil health will only help it so far.”

12 Of The Most Jaw-Dropping Science Photos Of 2014

Given the traditional conversion rate of pictures to text, it’s worth spending 12,000 words talking about all the amazing scientific sights captured in 2014. But instead, we’re going to let... END_OF_DOCUMENT_TOKEN_TO_BE_REPLACED

Cemetery ecosystems, thunderstorms, cold virus, rose petals, avalanches and what killed the dinosaurs  - what could they possibly have in common?  They're all in this issue of SciNews! This... END_OF_DOCUMENT_TOKEN_TO_BE_REPLACED

Free Webinar: How to Teach Science in a Covid-19 Environment in various Instructional Models in Canada

Flinn has developed a framework from various educational and health authorities that will provide guidance on teaching Science and STEM. WE will explore the following topics during the session:... END_OF_DOCUMENT_TOKEN_TO_BE_REPLACED