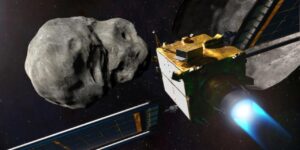 Oct 11 (Reuters) – The spacecraft NASA deliberately crashed into an asteroid last month succeeded in nudging the rocky moonlet from its natural path into a faster orbit, marking the first time humanity has altered the motion of a celestial body, the U.S. space agency announced on Tuesday.

The $330 million proof-of-concept mission, which was seven years in development, also represented the world’s first test of a planetary defense system designed to prevent a potential doomsday meteorite collision with Earth.

Findings of telescope observations unveiled at a NASA news briefing in Washington confirmed the suicide test flight of the DART spacecraft on Sept. 26 achieved its primary objective: changing the direction of an asteroid through sheer kinetic force.

Astronomical measurements over the past two weeks showed the target asteroid was bumped slightly closer to the larger parent asteroid it orbits and that its orbital period was shortened by 32 minutes, NASA scientists said.

Last month’s impact, 6.8 million miles (10.9 million km) from Earth, was monitored in real time from the mission operations center at the Johns Hopkins University Applied Physics Laboratory (APL) in Laurel, Maryland, where the spacecraft was designed and built for NASA.

DART’s celestial target was an egg-shaped asteroid named Dimorphos, roughly the size of a football stadium, that was orbiting a parent asteroid about five times bigger called Didymos once every 11 hours, 55 minutes.

The test flight concluded with the DART impactor vehicle, no bigger than a refrigerator, slamming directly into Dimorphos at about 14,000 miles per hour (22,531 kph).

Comparison of pre- and post-impact measurements of the Dimorphos-Didymos pair as one eclipses the other shows the orbital period was shortened to 11 hours, 23 minutes, with the smaller object bumped tens of meters closer to its parent.

The Mandelbrot Set  By Robert Knetsch Rob has had many years of teaching Physics and Math in the private school system and loves abstract thinking and the history of new math discoveries In the... END_OF_DOCUMENT_TOKEN_TO_BE_REPLACED

She was born with heart defects. Now she’s researching a cure - U of T Engineering News

Bailey Bernknopf was born with four congenital heart defects.She had her first surgery at five months old, followed by another at age 14 that had left doctors wondering if she would survive the... END_OF_DOCUMENT_TOKEN_TO_BE_REPLACED

How 80s Music Can Help Us Teach During COVID-19